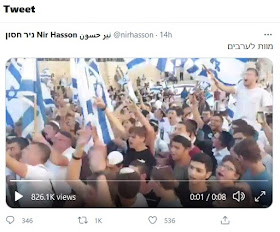 Yesterday, somebody challenged me to write about a horrific video in the news yesterday. It showed a group of religious Zionist youth at yesterday's Flag Parade in Jerusalem, chanting "Death to the Arabs." Apparently, my interlocutor thought that I would not acknowledge problems in the community with which I identify. He was mistaken. Of course, we all have our biases, but I am perfectly ready to acknowledge the Religious Zionist community has a problem with anti-Arab racism and violent extremism.

Inaccurate generalizations are a reason why I intensely disliked the Netflix series Unorthodox. (Full confession: I didn't get even halfway through it, so if my comments are rendered inaccurate by the full series, let me know.) I don't know much about chassidic communities in New York, but I suspect that they are not as broadly unpleasant as the series indicated. And the depiction of secular, non-Jewish life in Germany was ridiculous. Of course, I'm sure that there are as many nice Germans as anywhere else. But the idea that all of them are the loveliest people, with no antisemitic tendencies whatsoever, and nobody takes advantage of a vulnerable girl? If you're making a series demonstrating dysfunctional and evil behavior in the chassidic community, it's hardly fair not to show any flaws in non-Jewish society.

And this brings me to a Facebook post by a certain chassidic rabbi which, in the 12 hours since it was posted, has received over three thousands likes and over a thousand shares. Rabbi Doniel Katz argues that "the consistent depiction of Hareidim and Torah Judaism by mainstream media, from Netflix to the daily news, is somewhere between delusion, slander and the literal equivalent of racism." He goes on to describe his family in detail, and reveals that they break all stereotypes. His wife works out with a gay female fitness coach. His children learn grammar, math and science, and after-school activities include Tae Kwan Do and robotics. None of them believe that the world is literally 6000 years old, and they freely read books about dinosaurs and science. They grow up to believe that when they are ready, they will "get a good job or learn a profession to support whatever lifestyle they choose." And they frequently host all kinds of religious and secular Jews as Shabbos guests.

Now, this sounds like a really, really wonderful family. But Rabbi Katz overreaches considerably. He then declares that "the truth is, while there might be many Hareidim who aren't like what I described above, it's still an accurate description of literally hundreds of thousands of Hareidim in Israel and the US."

Rabbi Katz's family as is about as representative of charedi society as the chassidim in Unorthodox. He and his wife are American baalei teshuva who are on Facebook. The vast majority of charedi society is absolutely not as he describes. And the simple proof is this: there is no way that any charedi publication would print his essay without heavy censorship!

How many charedi schools in Israel, or chassidic schools in the US, are teaching math and science to an serious level? Hardly any. How many charedi kids in Israel are learning Tae Kwan Do and robotics? Very few - aside from being ideologically against it, most charedim can't even afford such extracurricular activities. How many charedi schools in either Israel or the US are teaching that dinosaurs lived millions of years ago? Not a single one. (At the Biblical Museum of Natural History, we don't even dare mention the "D" word!) How many charedi kids are taught the ideology and the education such that when they are ready, they will "get a good job or learn a profession to support whatever lifestyle they choose"? Hardly any.

In the comments to Rabbi Katz's post, there are countless non-charedim declaring how beautiful his post is, and how it needs to be shared widely. But there are also numerous chassidim and charedim stating how inaccurate and hurtful and even dangerous it is. It would be wonderful if everyone or even most people in charedi society were like Rabbi Katz's family, but the fact is that they aren't. As a generalization (i.e. applicable to most though not all), charedim do not believe in prehistoric dinosaurs, raise their children with a solid secular education and the ability and desire to get a professional career, or host non-charedi Jews for Shabbos meals (unless it's to convert them).

Misrepresenting charedi society in order to counteract the distortions of Netflix is wrong. It is hurtful to those who have suffered from the shortcomings of charedi society. It creates false expectations with people who are thinking of joining this society, and who later suffer when they see that it's not what they were told it was. And it prevents charedi society from attempting to solve its shortcomings. If you don't even acknowledge the extent to which shortcomings exist, what chance is there of fixing them?

If you'd like to subscribe to this blog via email, use the form on the right of the page, or send me an email and I will add you.