A Rav with Strength and Integrity 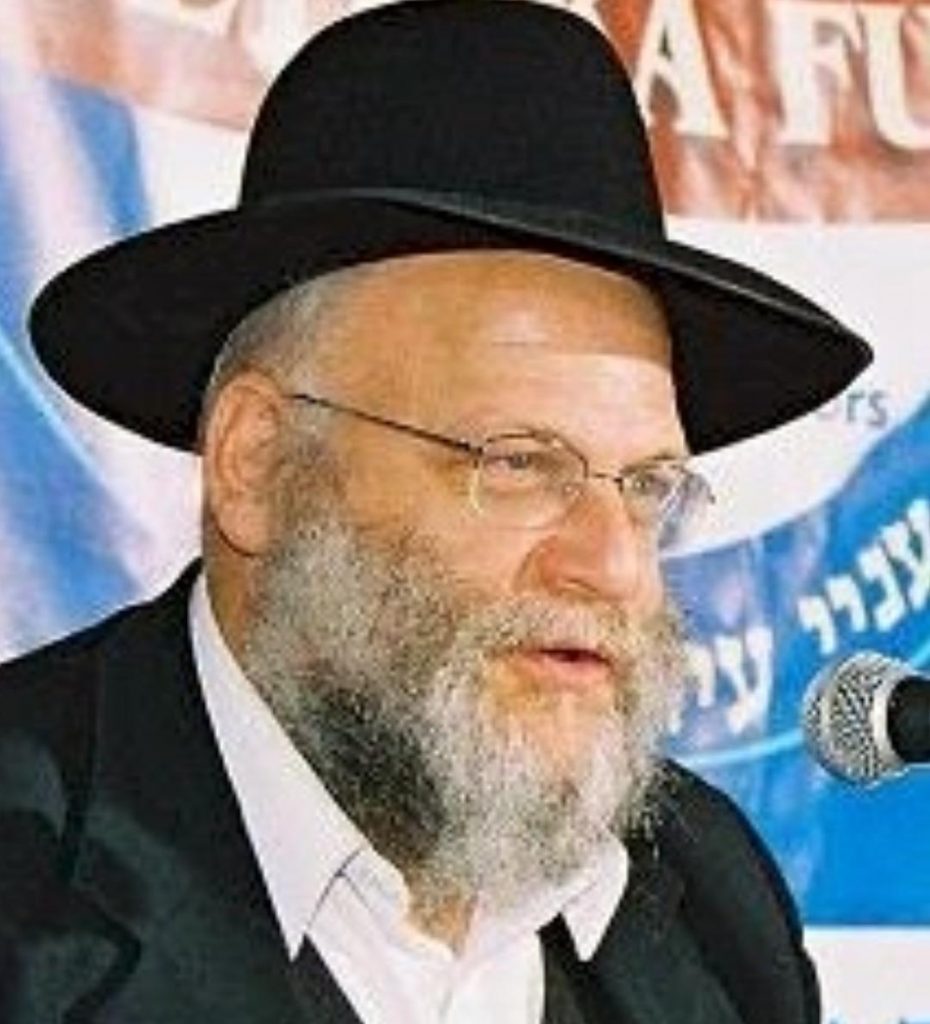 The news of the passing of Rav Chaim Malinowitz - senior editor of the Schottenstein Talmud (Bavli and Yerushalmi), rav of Beis Tefillah in Ramat Beit Shemesh - came as a great shock. He had been seriously ill for a while, but it was not thought to be life-threatening. But more than that - Rav Malinowitz was a larger-than-life figure, and it seems impossible for him to not be alive.

In the years 2004-2006 in particular, he was one of the most important people in my life. Over the last few years our relationship unfortunately broke off, when he became involved in political campaigning for the Abutbul administration in Beit Shemesh and took stances in various other community issues to which I (and many others) deeply objected. Fortunately, in the last few months we were able to patch things up on a personal level.

My relationship with Rav Malinowitz goes back over twenty years, before he was appointed rabbi of Beis Tefillah in Ramat Beit Shemesh. I was twenty-four years old, single, learning in yeshivah in Jerusalem, and publishing a weekly parashah sheet. In one of those essays, I penned a criticism of a popular icon in the wider Jewish world. A barrage of complaints ensued, and being a sensitive person plagued by self-doubt, I issued a public apology and retraction. Whereupon I received an email from someone who identified himself as one Rabbi Chaim Malinowitz. He wrote that my original article was absolutely correct, that I shouldn't have buckled under criticism, and that my parashah essays won't have much value if I just pander to the demands of others.

From his email, it was apparent that he thought I was much more senior than I actually was, so I wrote back to him and explained that I was just a 24 year old yeshivah bochur. Next thing I knew, he showed up at my yeshivah to chat with me. I was a bit puzzled at this special visit, but things became clearer when, a few days later, it turned out that he was proposing a shidduch for me! It was truly an honor, even though that shidduch was not meant to be. And subsequently we kept in touch.

A few years later, I was married and living in Ramat Beit Shemesh, and our shul at the time, Beis Tefillah, was searching for a rabbi. I suggested hiring Rav Malinowitz, as did a few other people. While there are very different views as to whether this appointment turned out to be good for Beit Shemesh (due to his political involvement), it certainly turned out to be incredibly fortuitous for me.

The story of the controversial ban on my books is well known. Perhaps not as well known is the role that Rav Malinowitz played in this story. While there were a number of rabbanim that supported me in various ways, probably none were as significant as Rav Malinowitz.

When the ban happened, which caused my family and I over a year of torment, I still saw myself very much as being a part of the charedi world. While there were rabbanim from the Centrist/Modern Orthodox communities inviting me to be a part of their world, I wasn't psychologically/socially ready to do that. And I was receiving hundreds of letters of support from people within the charedi world, so I wasn't ready to portray the controversy as being a charedi vs. non-charedi dispute (I have since mostly changed my mind on that). So it was crucial for me to have rabbinic guidance and support from within the charedi world.

Now, there were rabbis in the charedi world who were supporting me. My own mentor in the topic of Torah and science, Rav Aryeh Carmell, stood by his approbations for my works and issued a further letter of support; but by that point he was too old and weak to be dynamically involved. There were other rabbanim in the charedi world who were giving me moral and strategic support, but they were understandably too afraid to be public about it. (Reminder: don't judge people until you are in their place.) And they weren't necessarily people with big-name authority anyway.

But there was Rav Malinowitz! He played a crucial role in so many ways. He was an outstanding Torah scholar with bona fide credentials in the charedi world, and with a prominent position as editor of the Schottenstein Talmud. He made himself available by phone and by email to guide me and support me at every step of the way. He helped me draft letters and develop strategies. He gave me crucial guidance in the topic of rabbinic authority.

Rav Malinowitz had a very sensible, traditional, grounded approach to Chazal and science. He once shared with me an interesting insight - "According to those people who think that Chazal had divinely-inspired knowledge of modern science, why would it be limited to the science of 2005? It would mean that Chazal knew every scientific discovery that will ever take place in the future!"

Interestingly, although Rav Malinowitz had written an approbation to my work, he himself did not agree with all of my approaches to Torah/science topics, with regard to Bereishis. (He had no particular expertise in science, and was deeply skeptical of it.) But this made his support for me all the more potent. When people would tell him that my approach to various topics was wrong, he'd say to them: "I agree with you! But that doesn't mean that it's beyond the pale of acceptable opinions!"

Importantly, he maintained that it was completely acceptable for people to dispute my approach. People were entitled to firmly maintain that the Gemara did not contain anything scientifically inaccurate, and that Bereishis is to be interpreted entirely literally. But what they were not entitled to do was to claim that I was not allowed to take a different view and that I was alone in doing so. They were entitled to condemn my approach, as long as they made it clear that they were also condemning Rambam, Rav Hirsch, and so on.

Rav Malinowitz was the one who explained to me exactly why I was not under the slightest obligation to obey the ban. He explained to me both why the rules of rabbinic authority do not require one to always listen to the Gedolim, and why their opposition to my work was mistaken. But it wasn’t just personal guidance that he gave me – there was no shortage of people doing that. Rav Malinowitz was one of only a handful of people in the charedi world who actually went on record as publicly supporting me.  He wrote an official letter, on shul letterhead, explicitly reiterating his support. 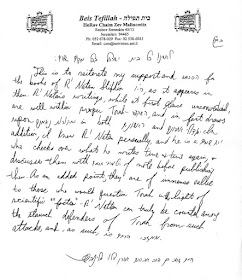 The significance of this should not be underestimated. In the charedi world, publicly going against the Gedolim is virtually unthinkable; the strength of character required is immense. It wasn’t just a matter of people badmouthing him (though, for people outside of the charedi world, it's hard to conceive of just how much pressure this can create). Rav Moshe Shapiro called him in to castigate him for undermining his stance against me - and Rav Malinowitz stood his ground. Rabbi Meir Zlotowitz at ArtScroll – Rav Malinowitz’s primary employer – threatened to fire him if he didn't repudiate his support for me. At that point, I told Rav Malinowitz that he could sell me out, as I didn’t want him to lose his job. But he told me that on principle he could not do such a thing. (Fortunately, as he predicted, the threat fell through.)

As the controversy over my books stretched out beyond a year, the toll became unbearable. My wife and I went to meet with Rav Malinowitz together to discuss the situation. He said to us: "Why not just leave the charedi community? Switch your kippah, send your kids to different schools, and that's that! You'll be much happier." We took his advice and were immensely better off for it. (Ironically, a few years later, Rav Malinowitz told me that he was upset that I followed his advice so completely as to even leave his shul - he hadn't meant for me to go that far!)

As I mentioned, several years later, Rav Malinowitz took positions on various communal and political issues that aroused much opposition in the non-charedi religious community, including with me. At one point, our dispute became very public. And yet, consistent with his own approach to rabbinic authority, he had no problem with my publicly disagreeing with him. He continued to email me over the years with various sources of interest. And while I was still upset by the communal positions that he had taken, and his public claims about there being a "War on Torah" in Beit Shemesh, I always told him that my gratitude for what he did for me in my hour of need would never falter.

Will there ever be such a figure in the charedi community again, with such integrity and strength of character? Rav Malinowitz's passing leaves a great void. May his memory be for a blessing.
at November 24, 2019
Share