No, Charedim Aren't The "Original" Jews 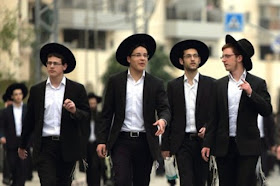 A recent column in Tablet magazine asks the following question: What does one call "really religious Jews"? "Ultra-orthodox," or something else?

Tablet decides to Rabbi Avi Shafran, director of public relations for Agudath Israel of America, for his answer. He begins by saying that "ultra-" is an offensive prefix, because of its implications of being something far beyond the norm, whereas the lifestyle of his community, he claims, is the traditional norm. We shall return to this claim soon. Shafran then complains that only so-called "ultra-Orthodox" Jews are denied the right to choose their own name for their group, unlike Native Americans and Blacks. He has something of a point here, which is why it would be appropriate to let "ultra-Orthodox" Jews choose their own name. However, they should choose one which will not be protested by others as inaccurate; Rabbi Shafran himself has protested that Open Orthodoxy should not define itself as a form of Orthodoxy.

Furthermore, ultra-Orthodox Jews already have chosen a name for themselves: charedim. The charedi community itself adopted that term in the early twentieth century and still proudly uses it today, and so Rabbi Shafran is not being a very good spokesman for his community when he says that he doesn't like it. And his alleged reasons for disliking it are rather odd. "Firstly," he says, "it implies that non-haredim are less observant, which isn’t necessarily true." Yet this is precisely why charedim chose it and like it as a definition - because they believe themselves to be more "trembling at the word of God" than others. Others, of course, would disagree, and would claim that while charedim excel at certain aspects of Judaism, they are no better than other groups in various other aspects, and they are decidedly inferior in yet others.

Which brings us to Rabbi Shafran's second reason for disliking the term: "And secondly, while we may shuckle when we daven, we don’t generally tremble (unless the IRS is auditing us)." Precisely. Charedim live in a "fear society," and they do indeed tremble more than others - but it's not always at the word of God, as often the fear of man is more potent. And it's not only in fear of the IRS and other consequences of being incapable of earning an honest living. Charedim greatly tremble in fear of what others in their community might say, which leads to transgressions in all kinds of areas.

In any case, the term "charedi" is liked by charedim for what they believe it to mean, and by others for what they see it to mean. Still, if Rabbi Shafran doesn't approve of "ultra-Orthodox" or "charedi," what does he say that his community should be called?


“Personally,” said Shafran, “I prefer ‘Orthodox.’ Let prefixes be used by others: centrist, modern, ultra-modern. We’re the original, in no need of a prefix.”

Now, Rabbi Shafran has written some things in the past that have caused a lot of head-scratching. There was his claim that Bernie Madoff is more worthy of admiration than Captain Sully. He believes that unyielding reverence for currently regnant dogmas is more of a problem in the scientific community than in the charedi community. He even claimed that charedi society is big on women's liberation and female empowerment! And so while his claim that ultra-Orthodoxy is the Original McCoy might not be the most outlandish thing that he's ever said, it's certainly equally incorrect.

Charedi Jews are not "the original" form of Judaism or rabbinic Judaism or even of Orthodox Judaism. Orthodox Judaism is itself a unique product of the mid-nineteenth century, developing as a response to the threats of modernity and emancipation. It differed from the Judaism that preceded it in several ways. One was its traditionalism - the opposition to anything which appeared to be a change, despite the fact that historically, many great rabbis had emended Talmudic texts, changed the siddur, changed communal practice, and so on. Another was its segregation - creating halachic rulings based on the needs of the immediate community, not the larger Jewish community. A third was its conscious tendency towards halachic stringency, as a principled reaction to the general spiritual laxity that had developed, along with the elevation of customs to law, and Rabbinic laws to Biblical laws.

Thus, Orthodoxy was itself a novel approach to Judaism. And Orthodoxy in turn branched into several forms, of which ultra-Orthodoxy is certainly very far from the original, in a variety of ways.

One of these is with regard to communal authority. Traditionally, leading Torah scholars were consulted on numerous issues. But, for most of history, political and communal leadership was in the hands of positions such as kings, exilarchs, and parnassim, rather than the leading rabbinic authorities. Furthermore, it was generally the case that, even for rabbis, wisdom in non-Torah-specific areas was understood to be commensurate with knowledge and experience in those areas. Daas Torah, however, presented the opposite notion: that the ultimate guidance on all areas of life—even social and political decisions with no obvious connection to Torah—is provided precisely by those who are the most cloistered from the world and who have only been immersed in Torah. (A further significant characteristic is that in contrast to the time-honored approach of rabbinic responsa, Daas Torah presents its conclusions without any explanations, halachic or otherwise.)

Another way in which ultra-Orthodoxy differs dramatically from traditional Judaism is in the role of the yeshivah vis-a-vis the community. In earlier generations, the yeshivah was merely another component of the community, servicing its spiritual needs and preparing its students for their role in the community as rabbinic leaders. But the new yeshivah was a distinct framework in which students were not preparing for their role in the community, but rather were deliberately isolating themselves from the community for the pursuit of studying Torah as its own ideal. Concurrent with this came the rise in authority of Roshei Yeshivah, with no experience in communal leadership or practical halacha, over community rabbis.

One of the charedi reformations with the most far-reaching ramifications is long-term kollel for the masses. Historically, while there is some precedent for supporting Torah scholars or those preparing for such a role, both the norm and the societal ideal was for most men to work and support their families. The charedi system, in which it is the women who train and work to support the family, has overturned the traditional roles of husbands and wives, enshrined in the kesubah and in millennia of halachah and Jewish history.

Another novel aspect of charedi society is in its opposition to secular studies. It is not only among the Rishonim that we find great engagement with secular studies and culture; none other than Chasam Sofer, while making some statements of general opposition to secular studies, nevertheless himself extensively studied many of the sciences, including mathematics, astronomy, and geography, as well as history and philosophy. And he even utilized the tools of academic, scientific study in order to evaluate halachic practice; at the Pesach seder, he used celery for karpas, based on looking at cognate Semitic tongues. Such a thing would be regarded as bizarre and inappropriate in charedi society today.

Judaism constantly evolves, sometimes for internal reasons and sometimes as a reaction to external situations. The massive challenges of modernity, the upheaval of the Holocaust and the test of Zionism has resulted in the development of a number of forms of Orthodoxy, including Modern Orthodoxy, Religious Zionism, Centrist Orthodoxy, and others. Ultra-Orthodoxy, otherwise known as Charedi Judaism, is one of the most radical and innovative evolutionary developments. The reason why many charedim believe otherwise is due to the lack of study of history, the carefully selected curriculum, and the rampant historical revisionism in their community.

It is disappointing that Tablet did not ask any historians, or non-charedi scholars, for their view. Because they would have dismissed Rabbi Shafran's claim to be the "Original Orthodoxy" as being ahistorical nonsense.


For more extensive discussion, see my monographs on The Novelty of Orthodoxy and The Making of Haredim.

Reminder: I am available for scholar-in-residence engagements on the West Coast in August, and in NY/NJ during October. Please email me at director@biblicalnaturalhistory.org for details.
at June 26, 2018
Share